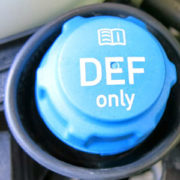 Effective January 1, 2010 new Environmental Protection Agency (EPA) regulations go into effect that reduces the amount of Nitrous Oxides (NOx) that on-highway diesel engines in both cars and trucks can emit. Nitrous Oxides levels are reduced by 95%.

In order to reach these lower levels of NOx, a catalytic converter has been added to the exhaust system by most diesel engine builders. 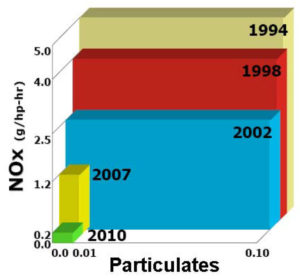 The effectiveness of the reaction in the catalytic converter is enhanced by the injection of a reacting agent as the exhaust gases enter the converter. This fluid is called by the industry Diesel Exhaust Fluid (DEF) and is composed of 1/3 urea and 2/3 de-mineralized water.

The usage will be approximately 2% to 3% of diesel fuel consumed for that engine and will have its own refillable tank. The addition of a DEF tank and a catalytic converter will add weight, expense and consume space in 2010 and later diesel powered vehicles. However, it does increase fuel efficiency by an estimated 3 to 5%.

Urea is a compound of Nitrogen that converts to Ammonia when heated. Urea is made from natural gas and the primary use has been for fertilizer. Even though urea is made from natural gas, major oil companies are not making or selling DEF at this time. The fertilizer industry is making the urea component. Urea is not compatible with the materials used in the handling of petroleum products.

The exhaust that enters the atmosphere from these new engines will be primarily harmless nitrogen and water.

Diesel engines will be cleaner than gasoline engines. Diesel engines that use DEF will have electronic sensors that control the rate of usage needed for that specific engine. The sensors will increase the rate of usage if the DEF should be diluted with water. Also, the vehicle will slow to a crawl if there is no DEF and will not restart once turned off unless the DEF tank is refilled. 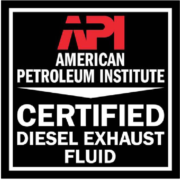 There are two standards that engine manufacturers require for DEF. The first is that the product be certified by the American Petroleum Institute (API). This has to do with the process of manufacturing. The second requirement is the International Standards Organization (ISO) specification ISO 22241-1, which establishes the formula and defines purity limits. Catalytic converters are sensitive to mineral contamination. That is why de-mineralized water is used to dilute clean urea. Purity is important to the life of the converter. The cost of these converters is several thousand dollars. Their life is shorten by mineral contaminates. Using a non API approved product or diluting with tap water will be a costly mistake. 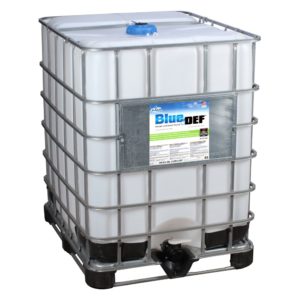 The handling of DEF differs in several ways from petroleum products:

Want to join the discussion?
Feel free to contribute!